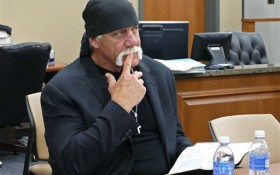 As testimony in Hulk Hogan’s lawsuit against Gawker Media grew extremely explicit Tuesday, an attorney offered evidence that Hogan has publicly discussed sex and other intimate details about his life over the course of many years.

The testimony included detailed references to Hogan’s sex life and sexual parts. In one audio clip from the Bubba The Love Sponge Show, the DJ and Hogan discussed the length of Hogan’s penis.

Hogan, whose given name is Terry Bollea, said that he did these interviews and media spots in the persona of his Hulk Hogan character, and not as he is in real life.

The morning testimony elicited Hogan’s take on his famous public image versus his private life — at times, a discourse on celebrity culture and identity.

Attorney Michael Sullivan asked Hogan if he was embarrassed by some of the media appearances, pointing to a clip on the Hogan Knows Best reality show. In that snippet shown for the jury, Hogan sat on the toilet, his pants around his ankles, talking to his then-wife on the phone.

Hogan said no, he wasn’t embarrassed.

Hogan also said he didn’t have a problem with news outlets discussing or even writing about the sex tape.

It was only when Gawker broadcast an edited clip of the actual video that he said he began to suffer.

“I never had a problem with the article. My problem is the videotape. It’s on the Internet. It lives forever,” Hogan said.

He also acknowledged he has little privacy as Hulk Hogan, with people taking photos of him everywhere, including once in a urinal at a baseball game.

Hogan and his attorneys are suing Gawker for $100 million, saying that his privacy was violated, that he suffered emotional distress and that the video was not something of legitimate public interest.

Although the trial has been chock-full of salacious details — an interview on Tuesday mentioned Hogan’s “thong-shaped tan line” that was visible in the video — it’s also a serious First Amendment case. The core issue: Did Gawker have the right to post one minute and 41 seconds of the sex tape, approximately nine seconds of it actual sexual content?

Gawker says the publication was a legitimate scoop because Hogan had talked openly about his sex life before, in forums such as Howard Stern’s radio show. The jury may have to grapple with questions about how celebrity affects expectations of privacy.

Hogan attained pro wrestling stardom in the 1980s and 1990s, winning multiple championships. He also became a celebrity outside his “Hulkamania” fan base, appearing in movies and television shows, including a reality show about his life on VH1, “Hogan Knows Best.”

As Hogan’s testified, he schooled the jury on wrestling history, telling them of being poor, sleeping in his car while performing in small-town matches across the South and finally getting his break when he was asked to appear in the Rocky III movie.

Hogan said that when he had sex with his then-best friend’s wife — with his friend’s blessing — he didn’t know the encounter was being taped.