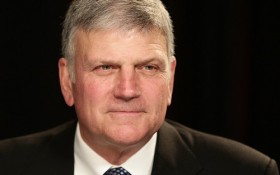 It was a tense situation that could have easily turned into a bloodbath. As the last four armed occupiers of an Oregon wildlife refuge shouted and argued for all the world to hear, the FBI closed in with snipers and armored vehicles.

But in the end, it was the calming presence and prayers of evangelist Rev. Franklin Graham that are being credited with the peaceful resolution of the situation after the four surrendered yesterday without a shot being fired.

Rev. Graham, at the request of both the FBI and of the occupiers, was in steady phone contact with the group over the last week, helping negotiate the end and comforting the armed protesters with prayers and guidance.

Graham is the son of legendary preacher Billy Graham.

The peaceful end to the standoff, which had lasted 41 days and resulted in one death, also signaled a victory for the FBI’s patient, “low burn” approach to the trespassers, and reflected lessons federal agents have learned since bloody standoffs at Waco, Texas, and Ruby Ridge, Idaho, in the 1990s.

“This was beautifully executed,” said Brian Levin, a criminal justice professor at California State University, San Bernardino. “This siege and the way it was handled will go down in law enforcement textbooks.”

The holdouts were the last remnants of a larger group that seized the Malheur National Wildlife Refuge on Jan. 2, demanding the U.S. turn over the land to locals and release two ranchers imprisoned for setting fires, in a controversy that exposed simmering anger over the government’s control of vast expanses of Western land.

The group’s leaders, including Ammon Bundy, were arrested Jan. 26 during a traffic stop along the snowy highway to the town of John Day, where they were due to appear at a community forum. Authorities said one man, Robert “LaVoy” Finicum, reached toward a pistol inside his jacket pocket, and police shot him dead.

Most of the occupiers fled the refuge. Four stayed behind, saying they feared they would be arrested if they left: 27-year-old David Fry, of Blanchester, Ohio; Jeff Banta, 46, of Elko, Nevada; and married couple Sean Anderson, 48, and Sandy Anderson, 47, of Riggins, Idaho.

On Wednesday night, the FBI tightened its ring around the holdouts, surrounding their encampment with armored vehicles — while also arresting one of their heroes, Ammon Bundy’s father, Cliven Bundy, as he arrived in Oregon to support them. The elder Bundy appeared in federal court Thursday in Portland to hear the charges against him, all of which stem from a 2014 confrontation with federal authorities at his ranch in Nevada.

As the standoff entered its final hours, the occupiers’ panic and their negotiation with FBI agents could be heard live online, broadcast by a sympathizer of the occupiers who established phone contact with them.

Their communication with Rev. Graham seemed to provide an outlet valve for the increasing pressure from federal agents, and afterwords the FBI officially credited his assistance with helping end the standoff peaceably.