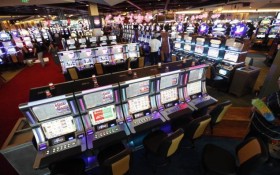 Officials say a former casino vice president conspired with a cocktail waitress and a gambler to steal over $400,000 from a northeastern Pennsylvania casino.

Court documents show Robert Pellegrini, a former executive at Mohegan Sun Pocono in Wilkes-Barre, was charged Tuesday along with server Rochelle Poszeluznyj and patron Mark Heltzel. They each face over 170 counts including theft, identity theft and criminal conspiracy.

The state police Bureau of Gaming says Poszeluznyj would collect players’ casino cards and PIN numbers when they paid for drinks. They say she passed them to Pellegrini to make duplicates, which he gave to Heltzel to use at slot machines. Police say Heltzel would split his winnings with the duo.