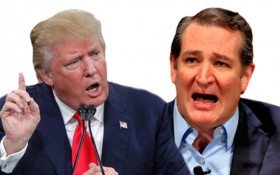 Despite trailing in national polls, Texas Sen. Ted Cruz was handed all 14 delegates up for grabs at the Republican Party convention in Wyoming this weekend.

And billionaire Donald Trump is claiming it was the result of payoffs, plain and simple.

Wyoming delegates are awarded through a convention process featuring party insiders, not average voters. And candidates have been known to wine, dine, and promise all sorts of favors to these delegates in exchange for their votes.

Rather than play that game, Trump largely bypassed the state. In a telephone interview Saturday on “Fox and Friends,” he said: “I don’t want to waste millions of dollars going out to Wyoming many months before to wine and dine and to essentially pay off these people, because a lot of it’s a payoff, you understand that?”

Trump’s defeat in Wyoming follows his shutout earlier this month in Colorado, where he failed to pick up a single delegate of the 34 in play. He has urged his supporters to protest the results to state officials in that state.

Campaigning in New York on Saturday, Trump said, “I guess I’m complaining ’cause it’s not fair to the people.” In Wyoming and Colorado, he said, “the people never got a chance to vote.”

Cruz, in an interview after his speech in Casper, said Trump’s decision not to campaign in Wyoming is telling. “The reason he decided not to show up is he recognized he couldn’t win, he couldn’t earn the support of conservatives in Wyoming,” Cruz said.