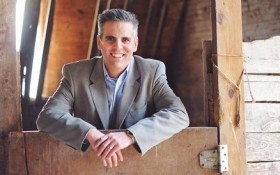 The cash stuffed into a large glass container on the circulation desk at Dover Public Library was a gesture of Christian charity meant to be an anonymous holiday gift to a needy family. The jars were inspired by the book “Christmas Jars”, but a thieving grinch stole the cash.

But its author is extending that charitable spirit to the thief who swiped the cash, asking to sit down with him and even buy him lunch.

Security video shows a man who appears to be wearing pajama pants, a hooded shirt and a jacket walking away from the Ohio library with the jar and an estimated $1,000 in donations on Tuesday evening.

“He’s not stealing money — he was stealing hope,” said Wright, of Woodstock, Virginia. He said he’d like to sit down with the thief to explain the jars’ charitable purpose.

“I want him to know this: Someone is on their knees right now praying for a miracle. They don’t know how to make it happen for their family, and that jar is supposed to be their miracle,” Wright said. “I’d love to meet him, buy him a burger and chat. I’ll bring him my Christmas Jar from home and personally deliver it to him. It wouldn’t be $1,000, but there’s a year’s worth of change in there.”

A man identified as a “person of interest” in the theft was found at a Dover home but said he wanted to speak with an attorney before talking to investigators, Dover police told the newspaper. They were waiting to see if he might turn himself in.

Meanwhile, Wright was recruiting online followers to contribute to the library’s fundraising efforts. A thousand dollars were pledged in the first day, and he offered to deliver the donations to the library in person.

Wright said thousands of collection jars have been given away in the decade since his book was first printed, but he wasn’t aware of any previous thefts.