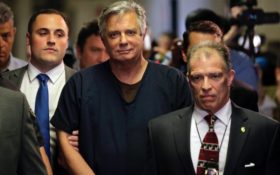 A New York judge threw out state mortgage fraud charges against Paul Manafort, ruling Wednesday that the criminal case was too similar to one that has already landed President Donald Trump’s former campaign chairman in federal prison.

The decision was a blow to what had widely been seen as an attempt by Manhattan District Attorney Cyrus Vance Jr., a Democrat, to hedge against the possibility that Trump would pardon Manafort for federal crimes. Vance’s office said it would appeal.

Manafort, 70, was convicted last year in two federal cases stemming from his business dealings and is serving a 7½-year prison sentence. He wasn’t in court Wednesday to see the state case dismissed because of a health problem.

Judge Maxwell Wiley cited in his decision New York’s strong double jeopardy protections, which prohibit state prosecutors in most cases from bringing charges against a person who has previously been charged for the same conduct under federal law.

“Basically, the law of double jeopardy in New York state provides a very narrow window for prosecution,” Wiley said, announcing his decision to prosecutors and Manafort’s lawyers at a hearing that lasted just a few minutes.

Coincidentally, it was scheduled for the same day that the U.S. House of Representatives was poised to impeach Trump over allegations he pressured his Ukrainian counterpart to investigate the son of political rival Joe Biden.

Defense lawyer Todd Blanche raised the double jeopardy issue soon after Manafort was indicted in New York in March. He wrote in court papers seeking a dismissal that the factual overlap between the federal and state cases “is extensive — if not total.”

“This indictment should never have been brought, and today’s decision is a stark reminder that the law and justice should always prevail over politically-motivated actions,” Blanche said in a written statement.

Manafort missed the ruling because of a heart-related condition that caused him to be moved last week to a hospital from a federal prison in Pennsylvania, two people familiar with the matter told The Associated Press on Tuesday.

Blanche said Tuesday that Manafort’s condition is stable, but that his family and friends remain “extremely concerned about his health and still do not have a full understanding of his medical condition or well-being.”

Manafort looked frail as he shuffled into court in June for an arraignment on the state charges. He remained seated as he entered a not guilty plea and had to be helped out of his chair. In March, at his sentencing in the second of the two federal cases, he used a wheelchair because of gout.

Manafort’s federal convictions stemmed from allegations he misled the U.S. government about lucrative foreign lobbying work, hid millions of dollars from tax authorities and encouraged witnesses to lie on his behalf.

Vance announced the state charges just minutes after the March sentencing, saying in a statement at the time: “No one is beyond the law in New York.”

The 16-count state indictment alleged Manafort gave false and misleading information in applying for residential mortgage loans, starting in 2015 and continuing until three days before Trump’s inauguration in 2017. He was also charged with falsifying business records and conspiracy.

Manhattan prosecutors argued that the state case was viable because it covered ground that couldn’t be resolved in Manafort’s 2018 federal trial in Virginia because of a hung jury. Jurors found Manafort guilty of eight counts of tax and bank fraud but couldn’t reach a verdict on 10 others, and federal prosecutors moved to dismiss those counts.

Manhattan prosecutors also contended their case differed from the federal prosecutions because mortgage fraud and falsifying business records are state crimes, but not federal crimes.

But Wiley ruled that a result of a hung jury still counts as a prior prosecution and that differences between the state and federal charges against Manafort weren’t enough to warrant an exception to the state’s double jeopardy law.

In paperwork filed in connection with Manafort’s arraignment, Manhattan prosecutors made clear that their case involved some of the same issues as those heard in federal court. For instance, they cited admissions Manafort made during his trial in Washington regarding misrepresentations in mortgage applications for properties in Manhattan and Brooklyn and on Long Island.

In May, New York lawmakers passed a bill to ease the state’s double jeopardy protections and ensure that state prosecutors could pursue charges against anyone granted a presidential pardon for similar federal crimes. Democratic Gov. Andrew Cuomo signed the legislation into law in October.

The president can pardon federal crimes, but not state offenses.