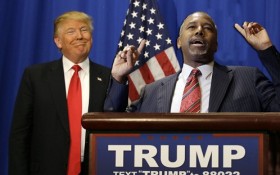 It’s the biggest endorsement yet for Republican presidential candidate Donald Trump, and it could help bring the 2016 presidential nomination race to an end. Just days ahead of the crucial winner-take-all primary votes in Florida and Ohio, Dr. Ben Carson has formally endorsed Trump.

Carson’s support will be critical for helping Trump win over the votes of skeptical conservatives and evangelicals that his main rival — Texas Sen. Ted Cruz — is counting on.

Carson said he and Trump have “buried the hatchet” after months of political wrangling during his endorsement of the GOP frontrunner’s White House bid.

At a press conference in Palm Beach, Florida today, Carson, who left the race earlier this month, described “two Donald Trumps” — the persona reflected on stage, and a private, “very cerebral” person who “considers things carefully.”

In his introduction to Carson Friday, Trump described the retired neurosurgeon as a “special, special person — special man,” and a “friend” who is respected by everyone.

Carson warned that it is “extremely dangerous” when political parties attempt to “thwart the will of the people,” and urged politicians to “strengthen the nation,” rather than create divisions.

Sources close to the campaign said Carson was torn between endorsing Trump and Cruz, but opted to support Trump because of the rumor that had been circulated ahead of the Iowa caucuses, when the Cruz campaign told voters that Carson had dropped out of the race.