Carson: Dems are “party of the KKK” - The Horn News 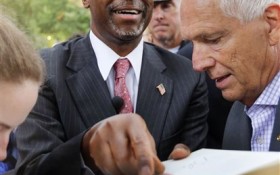 Presidential candidate Ben Carson is becoming quickly known for his take-no-bull attitude — especially when it comes to racial and religious relations.

At a recent speech, Carson said it was time for African American voters to abandon the Democratic Party and to remember Democrats’ checkered racial history.

Speaking before a group of African American activists and leaders, Carson said that the Democratic Party, “…is the party of the KKK. Of Jim Crow laws. And perhaps just as bad right now, of servitude. ‘Now you do this, and we’ll take care of you, pat you on the head, take care of all your needs.’ Which keeps people believing that’s what they actually need.”

While wading into racial and religious issues is considered a minefield for many politicians, it’s been a boon for the Carson campaign.

Carson’s fortunes surged a few week ago after he said he would not support a Muslim president. His campaign raised roughly $700,000 in the 36 hours after he made the comment, Bennett said.

According to the Associated Press, on Thursday Carson will call for the revocation of the non-profit tax status of the Council on American-Islamic Relations, the nation’s largest Muslim advocacy group, whose leader called on Carson to leave the race last month.

“The Judeo-Christian values upon which America was built allowed us to become the greatest force for good on the planet,” Carson says in a fundraising appeal distributed this week that repeats his criticism of a prospective Muslim president who supports Sharia law.

“He sounds like a man who believes we need to get back to our Christian heritage,” said Dean Barney, a 63-year-old truck driver who lives in Asheboro, North Carolina, when asked what inspired him to donate. “I like his humility. And he’s no politician.”

Carson’s campaign has seen a huge boost recently in both the polls… and in fundraising dollars.

While the GOP establishment remains deeply skeptical of the retired neurosurgeon’s chances in 2016, even the most seasoned political operatives concede that Carson’s ability to raise money, if not his rising poll numbers, exceeds their expectations and ensures him a prominent place in the packed Republican contest four months before voting begins.

Carson’s team confirmed Wednesday he has raised more than $20 million in the three-month period that ended Wednesday and $31 million overall since he entered the race in May — much of it from small-dollar donors or newcomers to presidential politics.