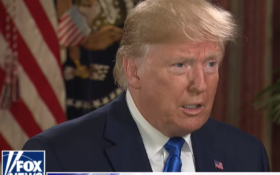 One of President Donald Trump’s old friends is returning to the spotlight… as a pro-impeachment figure.

She once stood beside Trump on the 2016 presidential debate stages as a leader of the GOP. Now, she’s getting behind his impeachment.

You may remember her, from one of her many spats with Trump leading up to the 2016 general election —

Former presidential candidate Carly Fiorina is publicly backing the Democrat-led impeachment of Trump, as she claims that his actions are “destructive to the public,” in an appearance on CNN.

His impeachment is “vital,” she says, believing that his offenses are impeachable based on his personality.

“I do think that the systematic tearing down of people, institutions, political opponents, will have long-lasting damage if it goes on for much longer.”

She doesn’t think Democrats will succeed in Trump’s removal and she doesn’t necessarily know whether or not she supports his complete removal either.

The former Hewlett-Packard CEO took aim at the GOP as a whole for what she claims its devout loyalty to Trump.

When asked by CNN host Poppy Harlow, “What does the Republican Party stand for?” — Fiorina responded, saying, “I don’t know.”

Before adding, “Loyalty to Trump, is what I think it stands for… sadly.”

“Right now, [the Republican Party] seems to be all about pledging fealty to Donald Trump no matter what and I’m just not in that place.”

But strangely enough, for all of her criticisms, she isn’t ruling out voting for the incumbent in 2020.
Shocking: Hitler’s Final Confession [sponsored]
“It depends who the Democrats put up,” she said.

Fiorina admittedly voted for Trump — not having wanted to vote for Hillary — after she lost the nomination in 2016. Shortly after the election she was rumored to be up for a cabinet position in the White House, this according to CNN reporting.

As for Fiorina herself, her future in politics in undecided and she’s keeping mum as to whether or not she’ll run for public office again in any capacity.