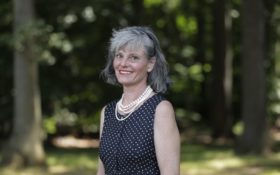 Carol Hafner is on the Democratic primary ballot for an Alaska U.S. House seat.

She doesn’t live in Alaska. In fact, she’s never been to the state. Hafner, who listed New Jersey and South Dakota addresses in her candidate filing, says she’s serious about running, though she doesn’t plan to campaign in person.

Democratic officials are questioning her authenticity and political affiliation.

Under the U.S. Constitution, to serve in Congress one must meet age and citizenship requirements and inhabit the state at the time elected. Generally, Alaska candidates in such races are from the state. But not always.

In 2014, a New York man, who has run in other states, challenged then-U.S. Sen. Mark Begich in Alaska’s Democratic primary and got crushed.

It happens elsewhere, too: In Wyoming, also in 2014, an Arizona man whose campaign consisted almost entirely of sock-puppet videos, won the Democratic nomination for U.S. House — unopposed — but lost to incumbent Republican Rep. Cynthia Lummis in the general election.

“You may have a right to run, doesn’t mean you’re going to be well-received, or it’s going to be an easy campaign for you,” said Jay Parmley, executive director of the state Democratic party. “If you’re not from somewhere, that’s a pretty tall order.”

Hafner faces long odds and has focused her attention online, where she boasts a comparable number of Twitter followers to those of the highest-profile candidates: Democrat Dimitri Shein and independent Alyse Galvin. Independents who want Democratic support can run in the party primary.

Shein and Galvin have been campaigning and participating in spirited debates ahead of the Aug. 21 primary. Republican U.S. Rep. Don Young faces little-known opponents in his primary.

Hafner listed on her candidacy filing a home and mailing address in New Jersey. She also listed an address at a mail-drop location in South Dakota popular with RVers and others with more transient lifestyles as her campaign contact on Alaska’s website listing of candidates. Public records show property and voter registration records for Hafner in New Jersey.

The New Jersey addresses match those used by Eric Hafner during a failed run as a Democrat in an Oregon U.S. House primary earlier this year, which caught the attention of Julie Olsen, an Anchorage Democratic party leader. She said she was worried that Eric Hafner had “hijacked” Carol Hafner’s identity and created an online persona to file for office. Olsen supports Shein.

Hafner, 64, said Eric Hafner is her son. She said he also ran unsuccessfully in the Republican primary for a U.S. House seat in Hawaii in 2016. Efforts to reach him were unsuccessful.

The Associated Press reached out to Carol Hafner via the email listed as her campaign contact. She responded by phone.

Hafner said she travels extensively and considers South Dakota her base. She said she has been in New Jersey for a family illness but is “on my way out.”

She felt compelled to run to share her perspective on the environment, including climate change, education, health care and other issues. Hafner said she was stunned that Alaskans have kept Young in office for 45 years.

“I want to do good in a place that I feel a kinship for,” she said.

She said she’s angry that Olsen has been “playing Nancy Drew” and questioning her run.

People must pull together to solve problems, Hafner said. “Don’t lock me out just because I’m not a homeboy,” she said, adding later: “You ought to be thankful that I care enough and I’m interested enough and passionate enough to want to make things better.”

“I’m certainly permitted to do what I have done,” she said.

The Division of Elections said challenges to Hafner’s candidacy by Parmley and Olsen were received after the protest deadline passed. The division said Hafner properly filed to run, a process that includes submitting a $100 filing fee, and it had no reason to question the veracity of her candidacy.

Olsen said she’d like to see changes to the process, such as having a candidate file in person or provide a phone number or copy of their driver’s license.

Kimberly Slone, of Wasilla, found out about Hafner by Googling candidates.

Slone said she sent Hafner via email questions about the Arctic National Wildlife and found that she opposes drilling there, as does Slone.

“I thought how audacious of her to run for election in Alaska,” Slone said.

She donated to Hafner’s campaign, but Slone said she’s not sure who will get her vote. It doesn’t matter to her if a candidate lives outside Alaska “as long as the candidate shows up to campaign and is knowledgeable about the state and will move here as required.”

Suzanne Hudson, an antique shop owner in Juneau, said she hasn’t been paying much attention to the race but bristled at the idea of an outsider weighing in on Alaska issues.

“If you don’t live in the state and don’t know what’s going on personally, you should stay out of it, because you could be making a law or a rule that’s going to really hurt a lot of people, even though it’s your opinion that it’s going to be better,” she said.