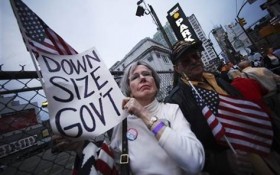 Another big government fiasco on the Left Coast. This time, it’s the California ‘green jobs’ initiative that has cost tax payers nearly $300 million since 2012.

California passed the Clean Energy Jobs Act in 2012, and the Legislature promised it would generate more than 11,000 eco-friendly jobs at schools and other public facilities.

Instead, only 1,700 jobs have been created in three years, meaning taxpayers have been on the hook for $176,000 for every job created.

According to the Associated Press, the state has no comprehensive list to show how much work has been done or how much energy has been saved.

More than half of the $297 million given to schools so far has gone to consultants and energy auditors. The board created to oversee the project and submit annual progress reports to the Legislature has never even met.

The State Energy Commission, which oversees Clean Energy Jobs Act spending, could not provide any data about completed projects or calculate energy savings because schools are not required to report the results for up to 15 months after completion, spokeswoman Amber Beck said.

Not enough data has been collected for the nine-member oversight board of professors, engineers and climate experts to meet, she said.

It’s undeniable that the Clean Energy Jobs Act has created a disappointing number of jobs, said Kirk Clark, vice president of the California Business Roundtable, which opposed the measure but did not aggressively lobby against it.

“We’ve got a long track record in California of over-promising green jobs and under-delivering,” said Clark, who also expressed concern that most of the jobs created so far appear to be consulting positions.