California to allow child molesters near schools - The Horn News 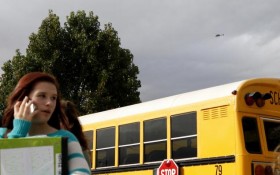 Parents are expressing outrage after a California court ruling sided with convicted sex offenders over the safety of children at school.

According to the Associated Press, three-quarters of California’s paroled sex offenders – previously banned from living near parks, schools and other places where children congregate – now face no housing restrictions thanks to a court ruling.

Among those now allowed to live next to a playground or school are convicted child molesters, according to reports.

The number of convicted sex offenders now facing no restrictions is far higher than officials initially predicted. The state expected half of the 5,900 parolees would have restrictions on where they can live or sleep lifted when the corrections department changed its policy following a March state court ruling.

Instead, data shows that 76 percent of offenders no longer are subject to restrictions.

Even some parolees whose offense involved molesting a child no longer face the 2,000-foot residency restriction, officials disclosed in explaining the higher number.

“A parole agent cannot simply prevent a parolee from living near a school or park because the offender committed a crime against a child,” Department of Corrections and Rehabilitation spokesman Jeffrey Callison said in a statement.

As a result of California’s policy change, more than 4,200 of the state’s 5,900 offenders no longer qualify for the residency restrictions, according to data compiled by the corrections department at the AP’s request.

“These numbers are absolutely astounding,” said state Sen. Sharon Runner, R-Lancaster, who co-authored the original ballot initiative. “Kids in kindergarten living across the street from a sex offender is not what the people voted for in Jessica’s Law. Seventy percent of the people voted to keep them away from schools and parks.”

The department spent months reviewing offenders’ criminal backgrounds before deciding that the ban should continue to apply to about 1,400 offenders. The department couldn’t provide the status of nearly 300 other offenders.

She and Criminal Justice Legal Foundation president Michael Rushford, who represents crime victims, said the department is broadly interpreting the March court ruling, which applied only to San Diego County. Officials have refused to release the legal advice from the state attorney general that they are relying upon in making the decision.

In the March ruling, justices found that blanket restrictions violate offenders’ constitutional rights by making it difficult for them to find housing and other services, without advancing the state’s goal of protecting children.