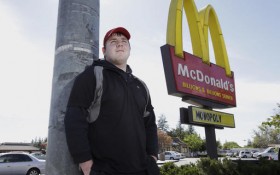 The California Assembly on Thursday green-lighted a plan that would create the highest statewide minimum wage in the nation of $15 an hour by 2022.

The proposal now moves on to the state Senate for consideration. The state of New York is considering a similar measure.

Gov. Jerry Brown and Democrats who control both legislative chambers hailed the increase as a boon to more than 2 million of California’s poorest workers and an example to the nation as it struggles with a growing gap between rich and poor.

Republicans echoed fears from business owners and economists that the annual increases — eventually tied to inflation — would compound California’s image as hostile to business.

“While we have made great strides in recovering from the economic recession, we know the bulk of that growth has been to the benefit of the top 1 or 2 percent,” said Assemblyman Roger Hernandez, D-West Covina. “Too many workers are working full-time for poverty wages.”

Republican say they would have preferred a tiered approach, such as Oregon’s recent decision to raise minimum wages over the next six years to $14.75 an hour in cities and $12.50 in rural areas.

Speaker Anthony Rendon, D-Paramount, said Assembly Democrats did not discuss amending the proposal before the vote and regional variance was not among the concerns that members of the majority party voiced.

Some Democrats and most Republicans were apprehensive that the proposal was not properly vetted. It received only one public hearing in the Legislature.

Lawmakers were largely excluded from negotiations on the final agreement between the Democratic governor and labor unions. Rendon said he was looped in after it was finalized, but many lawmakers found out about the deal in news reports.

A legislative analysis released earlier this week estimated the deal would eventually cost taxpayers an additional $3.6 billion a year in higher pay for government employees.

“No analysis has been done as to how we’re going to cover the $4 billion in costs,” said Assemblywoman Kristin Olsen, R-San Ramon.

Economists have warned that some low-wage workers will lose their jobs, even as others see higher paychecks.

It would have a ripple effect for those earning near the minimum, according to the University of California, Berkeley, Center for Labor Research and Education, increasing pay for 5.6 million Californians by an average of 24 percent.

The right-leaning American Action Forum countered with its own projection that the increases could cost nearly 700,000 jobs.

Businesses with 25 or fewer employees would have an extra year to comply. The governor could delay annual increases in times of budgetary or economic downturns. Wages would increase to keep up with inflation after 2023.

In New York, Gov. Andrew Cuomo and state lawmakers continued to negotiate Thursday over Cuomo’s proposal to gradually raise the state’s minimum wage from $9 to $15 by the end of 2018 in New York City and by mid-2021 elsewhere in the state.