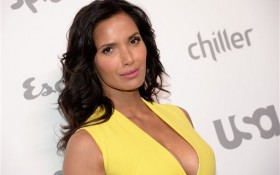 These five union thugs won’t be pushing around people any time soon. The group, all members of a Teamsters local who were accused of intimidating the staff and crew of “Top Chef” while it was filmed in Boston last year, were indicted Wednesday on federal extortion charges.

The indictment says members of Teamsters Local 25 demanded that union members be hired as drivers, then threatened and harassed the crew for the reality TV show’s non-union production company.

The Teamsters are accused of threatening to picket the Omni Parker House, where the show was scheduled to film, prompting the hotel to refuse to allow the crew to use the location for the show.

The men are also accused of yelling profanities and racial and homophobic slurs at host Padma Lakshmi and the crew while they filmed at Steel & Rye, a restaurant in the Boston suburb of Milton.

Three Teamsters were ordered released Wednesday on $50,000 unsecured bonds; a fourth was ordered held until a detention hearing Thursday. The men pleaded not guilty to charges of conspiracy to extort and attempted extortion.

“In the course of this alleged conspiracy, they managed to chase a legitimate business out of the city of Boston and then harassed the cast and crew when they set up shop in Milton,” Ortiz said.

The indictment alleges that beginning June 5, 2014, the men conspired to force the production company to pay Local 25 members for unnecessary work by threatening physical and economic harm.

On June 10, 2014, several of the men are accused of showing up at Steel & Rye, then chest-bumping and stomach-bumping crew members to try to forcibly enter the restaurant. The indictment alleges the men continued to use and threaten physical violence against the crew and others. They also blocked vehicles from entering the set and tried to prevent people from entering, according to the indictment.

The indictment doesn’t specify whom the men were targeting in allegedly yelling profanities and slurs, but a person close to the investigation said Lakshmi was among those targeted. The person was not authorized to release details of the investigation and spoke to The Associated Press on condition of anonymity.

The indictment said crew members saw the Teamsters standing close to cars belonging to the crew. Nine cars were later found to have had their tires slashed.