FOR SHAME! TV star busted lying about 9/11 - The Horn News 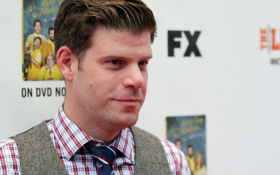 Busted! Comedian and TV star Steve Rannazzisi told a detailed story about working for Merrill Lynch on Sept. 11 in a podcast hosted by Marc Maron. The comedian said he felt jostled when the tower next to him was struck and he escaped to the street, despite hearing loudspeaker messages urging people to stay put.

He said he walked to his home across the Brooklyn Bridge after rejecting a cab driver’s request for $500 to be driven there. He said his then-girlfriend, now his wife, also worked at the World Trade Center and for several hours didn’t know where she was until she walked in the door. She had been stuck in the subway and hadn’t made it to work, he said.

He was lying the whole time.

Comedy Central said Wednesday it is reevaluating what to do about Steve Rannazzisi’s planned stand-up special this weekend after the comic apologized for lying about working in New York’s World Trade Center when terrorists attacked on Sept. 11, 2001.

Rannazzisi said he didn’t know why he told the story, which he called “a mistake that I deeply regret and for which apologies may still not be enough.”

The comedian appears in the FXX series “The League.” One of his first Hollywood roles was on Ashton Kutcher’s MTV show, “Punk’d.” Sports fans may know him from a Buffalo Wild Wings commercial. The Comedy Central special titled, “Breaking Dad,” and said to feature stories about fatherhood, is scheduled for Saturday at 11 p.m. EDT.

“We just learned about his last night,” said Comedy Central spokesman Steve Albani. “We are very disappointed to hear about Steve’s misrepresentations and are currently determining how we will move forward.”

His falsehood was first reported in a story published Wednesday in The New York Times.

Rannazzisi said in a statement that he was in New York City on Sept. 11 but was working in midtown, and that he began telling the story after moving to Los Angeles.

“I don’t know why I said this,” he said. “This was inexcusable. I am truly, truly sorry.”

He said he wished that subsequent silence could erase a story told out of immaturity.