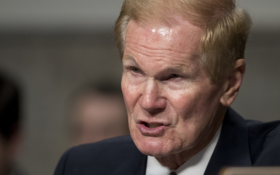 Florida Sen. Bill Nelson, a top Democratic lawmaker, is having a rough week.

In a secret video that emerged this weekend, Nelson appears to do a 180-degree turn and essentially admitted all his previous claims about Russian election interference weren’t true.

Earlier this month, Nelson warned The Tampa Bay Times and other liberal media outlets that “the Russians are in Florida’s records” — an alarming claim that foreign spies had penetrated our elections and were meddling in the results.

Here’s what he said on MSNBC —

Nelson’s unsubstantiated claims, though, quickly brought condemnation from both sides of the political aisle.

Even The Washington Post wrote-up an article Friday that ruled Nelson was pants-on-fire lying… unless he’s leaking classified information that’s not available to the public.

“Nelson … went on to make a specific and alarming claim several times: that Russia currently has access to Florida’s election systems and could purge voters from the rolls,” The Post’s fact-check concluded. “Not a single speck of evidence backs him up, and we have serious doubts whether the classified information he cited even exists.”

The Florida Democrat quickly rushed to defend himself, citing an NBC article that he thought (wrongly) defended his claims —

Unfortunately, that didn’t help… because the only defense the article gave was that Nelson may have been illegally sharing state secrets instead of lying.

In other words, either Nelson is caught lying to voters… or he was just caught committing a crime.

Our Four-Pinocchio rating stands. Everything in this article was noted in our piece, except for the suggestion that Nelson leaked classified information. https://t.co/j7To5lj1k5

And things only got worse for Nelson.

Over the weekend, secret footage emerged of Nelson contradicting the claims he had just finished telling CNN he still stood behind.

Democrats really aren’t sending their best, are they?