BUSTED: The video Ocasio-Cortez wants BANNED from the internet! - The Horn News 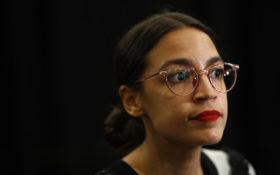 It was one of the biggest, wildest and most outrageous claims by divisive socialist Rep. Alexandria Ocasio-Cortez (D-N.Y.) about conditions for migrants at the U.S. border.

But as it turns out, it was yet another ugly lie!

The freshman lawmaker was just busted ON VIDEO by one of the hard-working men and women of the Border Patrol that she had insulted.

And all this brave agent had to do… was drink a cup of water!

Ocasio-Cortez of course visited the border detention facilities earlier this month to see where illegal immigrants are held for processing.

Are they overcrowded? Of course they are; as President Donald Trump keeps saying, there is a crisis at the border and our facilities are overwhelmed – and funding is needed to improve conditions.

But instead of acknowledging that reality and working to fix it in Congress, Ocasio-Cortez went down for a photo op where she hugged migrants and yelled into the cameras.

One of her claims: Migrant women were FORCED to drink from a toilet.

But Roy Villareal – chief patrol agent of the Tucson sector – set the record straight with a short video tour of the facilities in his jurisdiction.

The footage, available now on social media, features Villareal showing off the supplies they keep on hand for women and children, such as clothing, diapers and personal hygiene items including feminine products and toothbrushes pre-loaded with toothpaste.

There are also snacks, blankets and more which he said were “readily available” to families in custody.

Then, he calmly busted wide open Ocasio-Cortez’s wildest exaggeration: Her claim that those inside were FORCED to drink toilet water.

But Villareal, who has served in the department for 30 years under both Democratic and Republican administrations, showed off one of those infamous “drinking” toilets.

It’s a combination toilet/sink/fountain unit, as is common in detention facilities and even in many public facilities in other nation.

The bottom is a standard toilet, and above it is a sink with faucet – with water perfectly safe to drink.

To prove it, Villareal took a cup… filled it from the “toilet” sink… and drank up:

Here is a look at the inside of a #BorderPatrol processing center with Chief Patrol Agent of #TucsonSector Roy Villareal @CBP pic.twitter.com/vu1dyV72Uz

After others also noticed that this is a fairly standard fixture in facilities such as these, Ocasio-Cortez was forced to ’fess up on Twitter.

“This was in fact the type of toilet we saw in the cell,” she confirmed, but then began to add new details, claiming the sink part at the top didn’t work in the unit she visited – and that’s when the women were told to drink from the toilet.

It’s hard to believe her story when the story keeps changing!

There’s no doubt conditions at the border need serious improvement.

But the officers there are in most cases doing the best they can with the limited resources they have – resources that can only be increased by Congress.

Democrats in Congress spent much of the past year claiming there is no crisis… that President Trump was making it all up… and refused to provide a single cent to help the immigrants and refugees.

They finally did pass a $4.6 billion bill in recent weeks.

But not everyone supported it.

Among the most notable lawmakers to vote AGAINST funding that would improve conditions at the border for migrants, including women and children?

Despite her grandstanding… despite her Twitter feuds… and despite her phony outrage… she voted AGAINST aid for migrants.

She essentially claimed there’s no way to ensure the Trump administration would actually spend the money on migrants – despite the fact that both the House and the Government Accountability Office hold oversight over budget matters.

The more likely story is she would rather scream at Trump and demand changes. Then, block him from making those changes so she can keep screaming at him.

It’s great for keeping your picture in the newspaper.

But it’s no way to run a country.