Drunk brat has outburst over “Mac and Cheese”, gets taken down… HARD - The Horn News 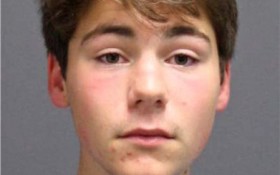 This spoiled brat is going to bed with no supper. A University of Connecticut student faces criminal charges over a confrontation with a campus food court manager who wouldn’t let him buy macaroni and cheese.

A 9-minute, obscenity-laced video clip shows freshman Luke Gatti arguing with and eventually shoving the manager inside the university’s student union in Storrs on Sunday night. Police and the manager said Gatti had been refused service for carrying an open alcohol container.

The video shows the apparently intoxicated 19-year-old questioning why in America he can’t have beer in the building. He uses a gay slur against the manager and repeatedly demands, “Just give me some (expletive) bacon-jalapeno mac and cheese.”

After shoving the manager, Gatti is tackled by another employee, is arrested by a police officer and spits at the manager before being led out of the building… head first.

Gatti, who’s from Bayville, New York, did not return a phone call or an email seeking comment. He’s charged with breach of peace and criminal trespass and is due in court on Oct. 13.

“Generally speaking,” she said, “any UConn student found to have violated the provisions of the Student Code may face penalties imposed by the Division of Student Affairs that range from probation to expulsion.”

Gatti was previously a student at the University of Massachusetts and was twice arrested last year on disorderly conduct charges, according to the Daily Hampshire Gazette in Northampton, Massachusetts.

During one of those arrests, he was accused of using a racial slur against a police officer, court filings show.

Video of the altercation is below (The takedown occurs at 6:12. Gatti begins crying at 7:58 once the cops show up)