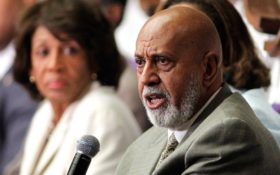 The House Ethics Committee said Thursday it is investigating powerful House Rep. Alcee Hastings, D-F.L., and his sexual relationship with a staffer.

The Ethics Committee said in a statement Thursday that it’s “aware of public allegations” that the 14-term Democrat has a personal relationship with a woman that works for him. The staffer was not identified, but news media in Florida have reported that Hastings’ girlfriend, Patricia Williams, serves as a top official in his district office in Florida.

The committee said it is investigating whether Hastings, 83, violated a 2018 House rule that prohibits sexual relationships between lawmakers and staff.

Lawmakers adopted the rule change after criticism for being slow to update Capitol Hill rules on sexual harassment.

Williams has worked for Hastings since at least 2000, earning more than $150,000 last year, according to Legistorm, a website that tracks members of Congress and staff.

A spokeswoman for Hastings could not immediately be reached for comment.

In 2017, the Foundation for Accountability and Civic Trust, a conservative watchdog group, included Hastings on its list of “worst ethics violators” of the year, citing Williams’ high salary and her relationship with the congressman.

Williams was paid $167,038 that year, according to an organization that tracks congressional staffers’ pay.

Hastings dismissed any suggestion of wrongdoing at the time. “This particular group can say or do what they want. But I’m not in violation of any ethics or law. Patricia has worked with me for 25 years,” Hastings told The South Florida Sun-Sentinel in 2017.

Another watchdog group, Citizens for Responsibility and Ethics in Washington, complained about Hastings’ employment of Williams in 2012.

The complaint is part of a pattern against Hastings.

A former congressional aide was paid $220,000 to settle a lawsuit alleging that Hastings touched her, made unwanted sexual advances, and threatened her job when she refused him.

The 2014 settlement with Winsome Packer, a former staff member of a congressional commission that promotes international human rights, was one of the largest secret settlements paid out in recent years by the congressional Office of Compliance.

“In 1981, Hastings was indicted on bribery charges stemming from actions he allegedly took while he served as a federal judge. During that case, he was represented by Williams, according to the National Review,” Local10.com reported. “He was acquitted in court, but was impeached and convicted in Congress.”