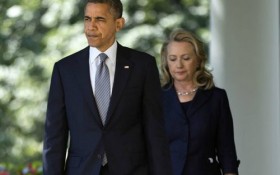 The Obama administration defied a federal court order and refused to release a key Hillary Clinton email concerning the 2012 attacks on a diplomatic outpost in Benghazi, Libya.

By holding back the information, the administration wasn’t just protecting Clinton from Benghazi fallout — they may have been trying to hide the fact that Clinton maintained a private email account while secretary of state.

In July 2014, government watchdog group Judicial Watch sued the federal government for all records related to the drafting and distribution of Benghazi talking points — especially communications between Clinton and her top State Department staff. The Benghazi attacks led to the deaths of four Americans, including Ambassador J. Christopher Stevens.

Last week, the State Department admitted to U.S. District Court Judge Royce Lamberth that it found a potentially damning email in September 2014, but withheld it from public release.

The email, from then-Deputy Chief of Staff Jake Sullivan to Clinton, concerns talking points for Clinton for her phone calls with senators about the Benghazi attacks.

Clinton’s talking points have long been of keen interest, because it is believed that she lied in the immediate aftermath of the Benghazi attacks by trying to blame them on an incendiary anti-Muslim video. Subsequent emails and phone transcripts have proven that Clinton knew the attacks were an organized Islamic terrorist attack, and she has faced enormous criticism for not doing more to protect American diplomats.

But the Obama administration may have had another key reason for holding back Sullivan’s email to Clinton. It turns out the email was sent to Clinton’s private account, which is currently the subject of a federal investigation that has been a major headache for Clinton’s campaign.

As Judicial Watch points out, if the email was released when it should have been, American citizens would have known about Clinton’s private email setup much sooner.

“Now we know the Obama administration consciously refused to give up key information about Hillary Clinton’s email in 2014.  It covered up this email both from the court and Judicial Watch,” said Judicial Watch President Tom Fitton.  “This cover-up provided Hillary Clinton enough time to hide potentially thousands of government records.”