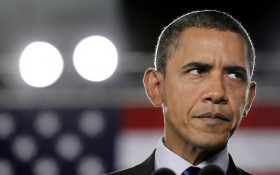 While President Obama and his family soak up the sun on their taxpayer-funded Hawaiian vacation, yet another scandal is brewing back in Washington.

It looks like the Obama administration has been caught red-handed spying on Congress… again.

As first reported by The Wall Street Journal, the National Security Agency has been spying on Israeli Prime Minister Benjamin Netanyahu for the past several years. The surveillance was initially authorized by both Obama and Congress over concerns that Israel would take unilateral military action against Iranian nuclear facilities.

But it doesn’t look like the spying stopped with Netanyahu.

According to the Journal, the NSA program expanded and included eavesdropping on conversations between members of Congress and Israeli officials and even American Jewish groups.

The private conversations were reportedly used by the NSA in intelligence reports sent to the Obama administration.

The flap comes after Obama promised in 2014 to stop spying on friendly heads of state, and a little more than a year after the Central Intelligence Agency admitted its staff had spied on employees of a Senate intelligence committee.

According to the Journal, the Obama administration is now concerned it is going to be accused of spying on Congress and private American citizens.

And the disclosure that the spying program had spun so badly out of control is causing what one official is calling an “oh, s— moment” for the president.