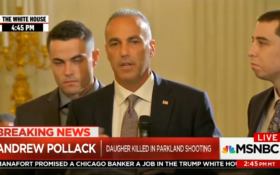 On Wednesday, the father of a Florida massacre victim visited the White House to discuss safety in schools.

Andrew Pollack’s daughter was killed during the massacre and shared his ideas on how to prevent any future mass shooting — and he was censored by the mainstream media.

On Thursday, NBC highlighted Pollack’s speech, but the network intentionally edited out his notion that gun control is not the main issue right now.

During the emotional listening session with President Donald Trump, Pollack clearly stated “And it stops, we all work together and come up with the right idea and it’s school safety. It’s not about gun laws right now. That’s another fight, another battle.”

The liberal media was not too happy that Pollack did not play into their rhetoric, so instead of broadcasting his full speech they censored out, “It’s not about gun laws right now.”

On NBC’s “Today” show White House Correspondent Kristen Welker recounted her own version of the speech, “Earlier Wednesday, at the White House, more painful pleas to President Trump directly. Andrew Pollack’s daughter, Meadow, was among the 17 killed in Florida.”

She followed up by explaining that Pollack was imploring: “Should have been one school shooting and we should have fixed it! And I’m pissed! Because my daughter I’m not going to see again.”

Later in the morning, NBC “Today” show’s Savannah Gunthrie continued the misrepresentation of Pollack’s speech by explaining, “Lawmakers from Florida to the White House faced families impacted by gun violence, including the most recent school shooting in Florida, as they demand swift action to change our nation’s gun laws.”

During Gunthrie’s misrepresentation, a soundbite ran of Pollack’s speech — and of course, his comment on gun laws was missing.

This father was trying his hardest to reach the nation and address the safety that is needed for the children of America.

How can the mainstream media decide that his message is not good enough for their liberal network?

Solutions will only occur if there is an unrestricted flow of ideas. Allowing censorship at these networks will be the death of the most important voices that we all need to hear.