Busted! Man behind tax return leak has dark past - The Horn News 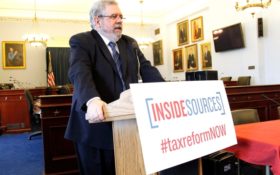 President Donald Trump’s tax return from 2005 was released Tuesday night by MSNBC’s Rachel Maddow — and it was a big flop.

Now, the journalist who brought the document forward has come under fire. Turns out, he has a secret past that seriously damages his credibility.

David Cay Johnson, the journalist who claimed to mysteriously find Trump’s tax return in his mailbox, was caught misreporting on financial issues in 2011.

Johnson was forced to retract an article he wrote due to misinterpretation of a financial document.

His article for Reuters claimed News Corp. made nearly $5 billion in income tax refunds… which was proved to be fake news.

Could the tax returns that Johnson allegedly found in his mailbox also be fake news?

Trump seems to think so. The president took to Twitter early Wednesday to cast doubt on Johnston’s account.

Does anybody really believe that a reporter, who nobody ever heard of, "went to his mailbox" and found my tax returns? @NBCNews FAKE NEWS!

The White House pushed back even before the release of the documents Tuesday night, saying that publishing the information was illegal.

“You know you are desperate for ratings when you are willing to violate the law to push a story about two pages of tax returns from over a decade ago,” the White House said in a statement issued on condition that it be attributed to an anonymous official, although the president has decried the use of anonymous sources.

The unauthorized release or publishing of federal tax returns is a criminal offense, punishable by a fine of up to $5,000 and up to five years in jail.

The White House has not said whether the president plans to release his returns while he’s in office, but a release straight from the source would be much more credible than the leak from this questionable journalist.