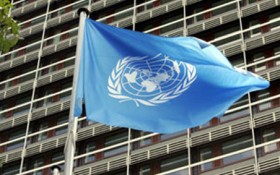 One foundation donated over $1.5 million to the U.N. office promoting cooperation between developing countries, while the other’s mission is to support new U.N. development goals.

A U.S. prosecutor charged Tuesday that Ashe accepted over $1 million in bribes from Ng and other businesspeople including Yan to pave the way for lucrative investments.

Ashe, a former U.N. ambassador from Antigua and Barbuda who served in the largely ceremonial post as head of the 193-nation assembly from September 2013 to September 2014, faces tax fraud charges in what authorities call a conspiracy with five others including Ng and Yan.

Dujarric said the audit will be conducted by the U.N.’s Organization for Internal Oversight Services and that “the steps announced today were initial steps.”

The U.N. Office for South-South Cooperation said in a statement late Wednesday that “all elements” of the foundation’s partnership with the Sun Kian Group Foundation “are currently under review.”

It said the $1.5 million was used, along with additional funding from a variety of sources, to organize conferences in Bangladesh in May 2015 and in Macau in August 2015.

In addition, the office said the money is being used to support preparations for a ministerial-level South-South Conference on Science and Technology and a summit of the Group of 77 developing countries to be held in 2016. It said money is also going to support the World Alliance of Cities Against Poverty and for a South-South technology exchange.

“The disbursement of funding on these initiatives was carried out in full compliance with U.N. standards and guidelines,” the office said. “All disbursed funds were tracked and accounted for, and there is no evidence that any funds received … were misdirected or misappropriated.”

The Global Sustainability Foundation says it was initiated by Ashe and jointly founded by the ACCM group, a group linked to Yan, as well as the New York Global Leadership Dialogue, the G20 Youth Leadership Alliances, and the New York Academy of Sciences.

It said its mission is to work with U.N. organizations on key aspects of the new development goals for the next 15 years by focusing on the life sciences, resources and energy, the environment, education, culture, and finance sectors.