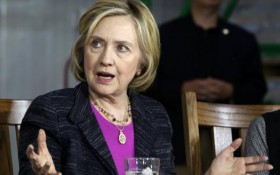 For months she’s fought questions about her use of private email and her cozy relationship with billionaire Wall Street financiers.

In recent weeks, Clinton has tried to dispel the notion that she’s controlled by Wall Street money by repeatedly claiming she’s never changed her positions due to lobbying from big banks.

The only problem? That’s just not true.

A video has surfaced of Massachusetts Sen. Elizabeth Warren complaining in 2004 about how Clinton as a senator flip-flopped on a bankruptcy bill as a favor to her Wall Street pals. (Warren’s statement starts after Clinton’s wild Wall Street claim, at the 1:04 mark).

Vermont Sen. Bernie Sanders’ supporters have gladly started circulating the video, which the Clinton campaign likely wishes would just go away. After all, less than half the voters in New Hampshire’s Democratic primary on Tuesday said they found Clinton to be honest and trustworthy, while about 90 percent believed those qualities fit her rival, Sanders.

Equally concerning for Clinton as she grapples with her double-digit loss to Sanders in New Hampshire: Voters who wanted a presidential candidate who cares about people like them sided overwhelmingly with the Vermont senator, an empathy gap that has proved devastating for previous presidential candidates.

“This is a serious, serious problem that is clearly afflicting her,” said Paul Maslin, a Democratic pollster. “It’s not just Bernie Sanders and the strength of his message or that she’s cast as the establishment. It’s a personal judgment that people have made about her.”

“Someone gives you money, you owe them,” said Francis Neddo, 64-year-old Sanders supporter from Londonderry, NH. “You don’t get money from them next time unless you pay off.”

Daniel Harty, a 21-year-old college student from Nevada, said Clinton seems dismissive of what he called “real problems,” particularly with her email use.

“It’s not something she should be laughing off,” he said.