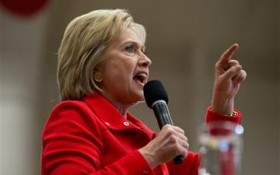 Voting for the Iowa caucuses kicks off in just hours. But Vermont Sen. Bernie Sanders’ campaign is already sounding the alarm that former Secretary of State Hillary Clinton may be using dirty and highly irregular tactics to win the state.

And some Sanders supporters are worried that she may even be planning to cheat by flooding the caucuses with paid and volunteer staffers.

As first reported by Yahoo! News, the controversy started when voters from Sioux County, Iowa reportedly received a mailing from the Clinton campaign asking them to caucus for her this evening.

But the mailing contained one piece of information that set off alarms among Iowa Democrats and long-time followers of the caucuses.

It named a paid, out-of-state Clinton staffer as the precinct captain — a move that the Sanders campaign has described as “highly irregular” and that could easily lead to abuse.

Precinct captains are responsible for wrangling supporters for particular candidates at local caucuses, and they are chosen from among local residents.

The fact that Clinton is using staff to fill caucus roles — something that is simply not done in tradition-rich Iowa — has led to fears that she intends to flood the local caucuses with people on the campaign payroll.

Worse yet, the Sanders campaign is worried that some of those staffers could end up participating in the caucuses and voting whether they’re eligible or not.

“I think this raises a very serious concern that they’re infiltrating the caucuses with…paid staffers,” Jeff Weaver, Sanders’ national campaign chairman, told Yahoo! News. “I would hope that the media will be able to get to the bottom of this before Iowans go to the caucuses on Monday night.”

Weaver and other supporters also stressed how unusual it is for a campaign to try to insert paid, non-local staff into official local caucus roles. And he seemed to suggest that the situation was ripe for voter fraud.