Busted! This evidence PROVES the media is biased - The Horn News 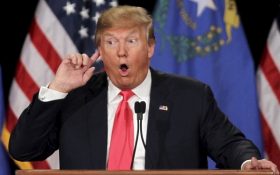 It seems like the bias in the media is getting worse and worse — and even the self-anointed “fact checkers” are guilty.

PolitiFact, which describes itself as “a fact-checking website that rates the accuracy of claims by elected officials and others who speak up in American politics” whose “staffers research statements and rate their accuracy on the Truth-O-Meter, from True to False,” recently published an article that claimed Republican presidential candidate Donald Trump was lying about the real unemployment rate among African-American youths, rating his statement as “Mostly False.”

But when Vermont Sen. Bernie Sanders made those very same claims a year ago, they labeled the claim “Mostly True.”

Too stupid to be true?

Afraid not. We have the undeniable evidence that even the most close-minded, diehard liberal can’t deny:

The contradiction (and it has nothing to do with the 8-point differential) was first noticed by eagle eyed users of Trump’s Reddit forum, and it’s smoking gun proof that the largest media “fact checking” organization in the country is clearly biased against conservatives.

The claims are simple — the real unemployment rate among African-American youth is staggering, both Sanders and Trump explained. The grim reality of our inner cities isn’t truthfully explained in the Bureau of Labor Statistics unemployment data.

The two articles discuss and “fact check” these two exact same claims, but the amount of mental gymnastics the authors make to defend Sanders is shameful.

Then, they turn around and use the same mental gymnastics to attack Trump just a year later.

In their Sanders article, Politifact concludes that, “Sanders said that for African-Americans between the ages of 17 and 20, ‘the real unemployment rate … is 51 percent.’ His terminology was off, but the numbers he used check out, and his general point was correct — that in an apples-to-apples comparison, African-American youth have significantly worse prospects in the job market than either Hispanics or whites do” and rules his claim ‘True’.

When Trump uses those same statistics?

There it is. It’s what we’ve been saying for years, laid bare — in the media, liberals are defended and conservatives unfairly attacked… even if they are saying the same exact thing!

If the so-called “fact checkers” can’t be trusted, who can be?

One thing is for certain — the naked hypocrisy in the media is now undeniable.