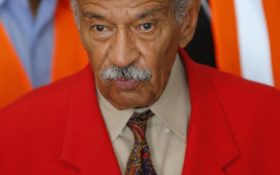 Longtime Michigan Rep. John Conyers on Tuesday denied settling a complaint in 2015 from a woman who alleged she was fired from his Washington staff because she rejected his sexual advances.

The website BuzzFeed News reported on Monday that the office of Conyers, 88, paid the woman over $27,000 to settle the complaint under a confidentiality agreement.

BuzzFeed also published affidavits from former staff members who said they had witnessed Conyers touching female staffers inappropriately — rubbing their legs and backs — or requesting sexual favors. One former staffer said one of her duties was “to keep a list of women that I assumed he was having affairs with and call them at his request and, if necessary, have them flown in using Congressional resources.”

Conyers, who answered the door at his Detroit home, told The Associated Press that he knows nothing about any claims of inappropriate touching and learned of the story from television just hours earlier.

“I have been looking at these things in amazement,” he said, referring to allegations of sexual harassment and assault being made against politicians and others.

House Speaker Paul Ryan labeled the report “extremely troubling.” Ryan, R-Wis., said the House is updating its policies for handling complaints of workplace harassment and discrimination, which have been criticized as too weak and cumbersome. His statement did not name Conyers, but Ryan spokeswoman AshLee Strong confirmed it was directed at him.

“People who work in the House deserve and are entitled to a workplace without harassment or discrimination,” Ryan said.

BuzzFeed said it received the documents from right-wing activist Mike Cernovich, but independently confirmed their authenticity. Cernovich said he gave the documents to BuzzFeed News because Democrats would “try to discredit the story by attacking the messenger” if he published them himself.

Conyers is the top Democrat on the House Judiciary Committee and the longest-serving current member of the House, having arrived in 1965.

The government has paid more than $17 million in taxpayer money over the last 20 years to resolve claims of sexual harassment, overtime pay disputes and other workplace violations filed by employees of Congress. The Office of Compliance released the numbers amid a wave of revelations of sexual misconduct in the worlds of entertainment, business and politics that made its way to Capitol Hill last week. Two female lawmakers described incidents of sexual harassment, one in explicit detail, and Minnesota Sen. Al Franken apologized to a woman who said he forcibly kissed her and groped her during a 2006 USO tour.

House Minority Leader Nancy Pelosi, D-Calif., said Monday that she was unaware of the settlement by Conyers.

“The current process includes the signing of non-disclosure agreements by the parties involved,” Pelosi said in a statement. “Congresswoman Jackie Speier has introduced legislation that will provide much-needed transparency on these agreements and make other critical reforms. I strongly support her efforts.”