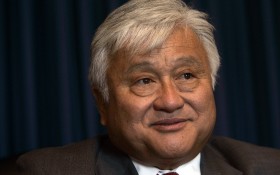 Scrutiny of longtime Democratic Rep. Mike Honda of California is reaching a fever pitch, with a new report that he may have used taxpayer-funded staff and resources to raise money for his reelection bid.

Such moves are strictly forbidden for members of Congress.

The independent panel interviewed Honda and some of his staff aides. It said there is “substantial reason to believe” that he used taxpayer resources, including staff time, to help his campaign and improperly tied official events to political or campaign support.

For instance, according to notes taken at a staff retreat, Honda’s then-campaign manager told congressional staff aides that Honda’s campaign “takes (district office) events and uses them to raise $.”

Honda’s staff also organized a February 2013 roundtable with a State Department official on business relations between India and the U.S. as the lawmaker began to represent a larger share of Indian Americans and was concerned that a candidate from that community would run against him.

Lists prepared by Honda’s staff noted past political donations by potential guests and top Honda aide Jennifer Van der Heide sent an email to campaign and official aides asking, “How are we doing outreach to them for $?”