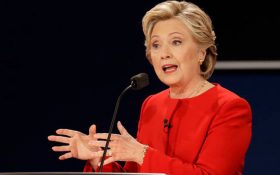 Here’s a look at some of Clinton’s most unbelievable lies in the debate Monday, and how they compare with reality:

1 – Clinton won’t put her money where her mouth is

Clinton’s first lie of the night didn’t take long, but it was one of her biggest. In Clinton’s opening statement, she claimed that government intervention is needed to “finally guarantee equal pay for equal work” for women. Clinton is referring to the oft-criticized myth that women in the workforce make less on average than men — a persistent rumor that has been proven false numerous times.

While there’s a debate on whether the gender pay gap is real nationally, it certainly DOES exist for women employed by Clinton. She has now been caught paying both her female senate and campaign staffers less than their male counterparts. They make anywhere from 77 cents to 90 cents on the dollar, according to independent research.

Clinton desperately denied Trump’s accusation that she called the Trans-Pacific Partnership trade deal the “gold standard” of trade agreements: “I did say I hoped it would be a good deal.”

But she’s lying. Trump is correct, and Clinton only changed her opinions when it became clear that hating the TPP was more popular than supporting it. On a 2012 trip to Australia as secretary of state, Clinton called the deal that was taking shape the “gold standard” of trade agreements. She championed it in other venues around the world. She did not merely express the hope it would turn out well.

Clinton flip-flopped into opposing the trade deal when struggling in the Democratic primary against Vermont Sen. Bernie Sanders, who was strongly opposed to it.

Clinton, claiming her tax plan was better than Trump’s proposal, said: “Independent experts have looked at what I’ve proposed and looked at what Donald’s proposed, and basically they’ve said this, that if his tax plan…were to go into effect, we would lose 3.5 million jobs and maybe have another recession. They’ve looked at my plans and they’ve said…we will have 10 million more new jobs.”

Even worse than cherry picking one of her supporter’s claims, Clinton knowingly used old, out-of-date information. Zandi’s pessimistic view — that Trump’s plan would cost 3.5 million jobs — was issued in the early summer, before Trump outlined more details on his tax cut proposals and other policies.

Trump’s revised plan has received praise from many leading economists.

Clinton, when defending her support of President Barack Obama’s controversial Iranian nuclear deal, said: “With respect to Iran, when I became secretary of state, Iran was weeks away from having enough nuclear material to form a bomb.”

Not just wrong. Dead wrong. A blatant lie. No one knows where Clinton got this bald-faced fabrication, but not a single intelligence report from any country has ever said that.

Clinton claims Iran was "weeks away" from a nuclear bomb. No intelligence estimate from any country supports that. Wrong #debatenight

5 – Clinton made up fake info about Trump’s income taxes

Clinton called for Trump to release his income tax statements, which the GOP candidate has repeatedly said his lawyers warned him against. During the attack, Clinton claimed Trump doesn’t pay income tax.

That is totally untrue. Trump did not pay federal income taxes only twice that anyone knows of, in 1978 and 1979. That’s when Trump’s public tax returns show his businesses lost money – which means he made no income to pay taxes on.

All other years available to the public show Trump did pay his fair share in income taxes.

Clinton’s shameful lies weren’t limited to Trump’s tax payments, her stance on the TPP, her support of the Iranian nuclear deal, her tax plan, and her support of women. They went on and on and on.

How can she be trusted to lead a country, when she can’t even hold an honest debate?

What was the biggest whopper YOU thought Clinton told during Monday’s debate? Comment below.