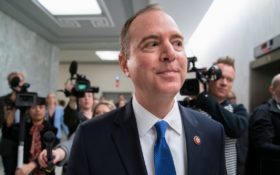 As the head of the Democrat-led impeachment inquiry into President Donald Trump, Rep. Adam Schiff, D-Calif. mis-categorized — and in some ways manufactured — evidence against the White House, a new report shows.

It’s not the first time Schiff has been caught lying during impeachment.

The controversy started in September when Schiff “illegally made up” parts of the controversial phone call between the White House and Ukraine’s leader, President Volodymyr Zelensky.

Trump pointed out that Schiff “actually took words and made it up” during a House Intelligence Committee hearing on the Ukrainian whistleblower. Schiff claimed his falsified retelling of Trump’s phone call was a “parody” and was not meant to be taken seriously.

In fact, Schiff has grown bolder as the impeachment of Trump headed towards the Senate trial.

The latest issue has to do with Schiff’s letter to House Judiciary Chairman Jerry Nadler, D-N.Y., last week that summarized “evidence” of Trump’s alleged wrongdoing from Lev Parnas, a former associate of Trump lawyer Rudy Giuliani.

It has to do with a reported exchange between Giuliani and Ukrainian President Volodymyr Zelensky — except Zelensky wasn’t actually involved at all.

“In one section of the letter, Schiff claims that Parnas ‘continued to try to arrange a meeting with [Ukrainian] President Zelensky,’ citing a specific text message exchange where Parnas tells Giuliani: ‘trying to get us mr Z.’ The remainder of the exchange — which was attached to Schiff’s letter — was redacted,” Politico reported.

“But an unredacted version of the exchange shows that several days later, Parnas sent Giuliani a word document that appears to show notes from an interview with Mykola Zlochevsky, the founder of Burisma, followed by a text message to Giuliani that states: ‘mr Z answers my brother.’ That suggests Parnas was referring to Zlochevsky, not Zelensky.”

In other words, Giuliani was trying to get in touch with a former business partner of Hunter Biden… not the Ukrainian government.

Republican insiders said this mis-characterization of so-called “evidence” by Schiff fits a pattern of misbehavior by Democrats.

“The most charitable view of the situation is that his staff committed the equivalent of Congressional malpractice by not looking more than an inch deep to determine the facts before foisting this erroneous information on his colleagues and the American public,” one senior Republican aide reportedly told Politico.

“But given the selective redactions and contextual clues, it seems as though Chairman Schiff sought to portray an innocuous meeting with Ukrainian oligarch Mykola Zlochevsky as an insidious one with the President of Ukraine simply because both of their surnames start with the letter Z,” the aide said.

In response to the ongoing impeachment trial, Trump retweeted the following criticism of Democratic leadership —

As the Senate Trial begins today, let's look back on the Dems' "solemn" and "somber" House impeachment.

Imagine if Dems put as much effort into solving the issues facing the American people as they do towards impeachment? Who knows what Congress might accomplish. pic.twitter.com/b2pwxDK8Et