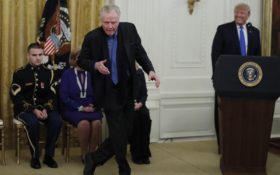 And what he said left conservative voters cheering.

He had some honest words for his fellow liberals in Hollywood.

And he even told the truth about his own liberal past…

During his appearance on “The Ingraham Angle,” Voight charged that the impeachment inquiry is showcasing just how unwell Schiff and Pelosi are.

Further, he summed up the impeachment proceedings in two words: “a lie.”

“It’s the culmination of the commitment to take down this president,” Voight said of the inquiry, adding that it’s a way of “exposing the truth.”

And Voight, an outspoken conservative among a sea of Hollywood liberals, also had some words for his fellow actors.

When asked about anti-conservative comments from the likes of certain celebrities, such as Madonna and Robert De Niro, Voight admitted he used to feel the same exact way back in the 1960s.

“It’s nice to be a revolutionary, iconoclast when you’re a young person, you think you’re doing something brand new… and you don’t look at the real result of all of this, youthful energies,” he said.

“… perhaps they’ll come to an understanding that that’s wrong.”

You can watch the interview segment below: