Bush set to drop out of GOP race? - The Horn News 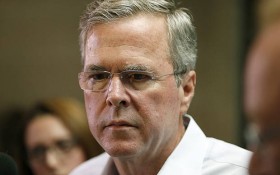 Former Florida Gov. Jeb Bush entered the 2016 presidential race as the odds-on favorite to win the Republican nomination. In the year since, his campaign has withered despite overwhelming backing by the GOP establishment and big money donors.

This week, rumors began circulating that the end is near. Internal sources have allegedly begun telling reporters that the Bush campaign is running dangerously low on cash and enthusiasm and may suspend operations completely as soon as this weekend.

Though the Bush campaign has vigorously denied the rumors, the fact that such a story is even plausible is evidence of how disastrously unraveled the Bush’s bid for the White House has become.

According to Erick Erickson at The Resurgent, “Sources close to the Bush campaign are beginning to leak about a call [Wednesday]. I’m told the Bush team is out of money. Pay for campaign staff will end on Saturday. The campaign is all but over.”

Erickson also reported that, “after having hundreds of millions of dollars on hand, the Bush Super PAC has less than $15 million from what I am being told.”

Wall Street source tells me top Jebber calling donors: He will drop out unless he finishes “strong third” in South Carolina.

Kerpen, a GOP insider and Fox contributor, responded to the Bush campaign’s criticisms of his source’s authenticity by saying:

I trust my source, but do note campaign denies: https://t.co/N5JOqRfhwO

We’ll likely find out this weekend if there’s any truth to these rumors, as multiple polls have Bush finishing a distant fourth in South Carolina in the Saturday primary.