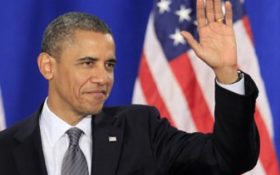 When former President Barack Obama was leaving the White House in January 2017, the Democrats were still performing an autopsy on former State Secretary Hillary Clinton’s failed campaign for president.

From the White House, Obama privately posited some theories about Clinton’s downfall. Earlier this month, the Justice Department finally released Obama’s official transcript as part of a Freedom of Information Act request… and it may surprise you.

However, Obama also issued some surprises. For example, he blamed the Democrats’ losses on a poorly timed meeting between Clinton’s husband and Attorney General Loretta Lynch… and on Clinton’s failure to visit Wisconsin during the campaign.

“My actual views are not wildly far off from what I’ve said publicly. I’ve tempered my language and tried to be diplomatic about it. I am a genuine optimist in the sense that, number one, I think it’s important for us not to ignore the multiple contingencies that resulted in Trump being elected and not somehow suggest that the country is invariably racist, misogynist, what have you,” Obama said two days before Donald Trump’s inauguration as president, according to the White House transcript obtained by Bloomberg News.

“And the fact of the matter is, setting aside that Hillary Clinton got the substantially bigger share of the vote, I think it’s fair to say that a whole series of different things happening — how the email thing unfolded, and sort of the chain from Bill Clinton getting on that plane, to Comey making an announcement. At a bunch of different junctures, people could have made different decisions that would have resulted in it playing differently.”

I think the Russian leaks, how that played out, how all this stuff was reported — I mean, I’m just being honest with you, and many of you share this view. You guys weren’t necessarily the culprits, but how that played out. Some failures of polling and analytics leading a leading Democratic candidate never to appear in Michigan or Wisconsin, or show up in a union hall, right? I mean, there’s just a bunch of stuff that could have happened in which we wouldn’t be having this particular conversation…

You know, I will say this about Comey. I think that — and I’ve been very careful about this — I think the way — as I said, if there’s Bill Clinton deciding he should get on Loretta Lynch’s plane, to the last announcement about Wiener emails, and it’s just like this train wreck and this cascade of decisions that I was powerless to intervene in, because I actually observe institutional norms and I’m not supposed to investigate — or meddle in investigations. But I think Comey is actually a person of high character and is not partisan when it comes to this stuff, and believes in playing it straight. That doesn’t mean that every call he makes necessarily will be the right one, because this is a human enterprise and everybody is human. But I trust his basic integrity. I trust him to — I think he thinks of himself as serving the American people and as a guardian of certain values and norms that I share with him.

Obama went on to repackage his infamous remark about conservatives’ tendency to “cling to their guns.” Still, he also said that Donald Trump, the incoming president at the time, had always acted politely in person.

“So what’s bound them together is opposition to me, opposition to a fantastical creature called the liberal who looks down on them and just feeds all that regional resentment, And there are a handful of issues, like guns, that trigger that sense of ‘these folks aren’t like us and they don’t like us and act like us.’ And there’s obviously some racial elements that get put out into that stew.”

Plus, in a particularly prescient moment, Obama warned the journalist community to watch out for future administrations’ attempts to politicize the Justice Department.

“I mean, look, when Congress calls — my staff, when we were subjected to some of those bulls**t subpoenas around Benghazi, tough people around here, they get nervous,” Obama said. “So I would say those are the two things that I worry about the most and you should be paying the closest attention to. I would be like white on rice on the Justice Department. I’d be paying a lot of attention to that. And if there is even a hint of politically motivated investigations, prosecutions, et cetera, I think you guys have to really be on top of that.”