Build that wall! Wall built in France to stop migrants - The Horn News 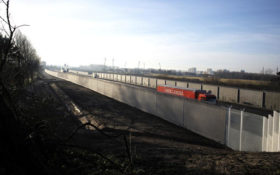 Funded by Britain, a wall has been built to stop migrants from jumping onto trucks in the northern French city of Calais heading across the English Channel.

The threat, however, appears to have already receded.

Regional spokesman Steve Barbet says no migrants have been reported trying to hop a truck since French authorities dismantled Calais’ refugee camp in October. He said Tuesday that police scouring the city and the surrounding area daily have found no new camps, though a handful of migrants still gather at the port.

Thousands of migrants from the Mideast and Africa, who had converged on Calais after fleeing conflict and poverty, have now been dispersed across France.