Trump picks up a famous ally in Buffalo - The Horn News 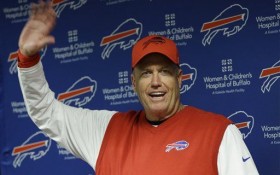 Donald Trump will be receiving a Rex Ryan-styled welcome to Buffalo.

The Buffalo Bills coach said he will introduce Trump at the Republican presidential candidate’s rally at Buffalo’s First Niagara Center on Monday night.

Ryan stopped short of endorsing Trump. Instead, Ryan said he was 100 percent behind New Jersey Governor Chris Christie, who has since exited the race.

Ryan said he and Christie are close and referred to himself and Christie as “the Lap-Band of brothers,” because both have had the weight-loss procedure.

There had once been a chance that Trump could have been Ryan’s boss in Buffalo. Trump was a finalist to purchase the Bills in September 2014. The New York City real estate mogul was outbid by Terry and Kim Pegula, who purchased the Bills for an NFL-record $1.4 billion.