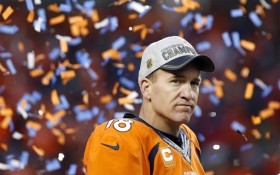 Peyton Manning is the only five-time MVP in NFL history, one of the faces of the league and, at 39, the oldest starting quarterback to lead a team to the Super Bowl.

Cam Newton is at the opposite end of his career, just 26, making his debut in the big game. He also is expected to earn MVP honors for the first time, part of a new breed of dual-threat QBs as good at running as they are at throwing.

Who do you think is going to win? Vote here —

Here are some of the biggest story lines for the 50th Super Bowl, which will be Denver’s record-tying eighth and Carolina’s second:

SUPERMAN – Newton threw for 335 yards and two TDs, and he ran for 47 yards and a pair of scores, leading Carolina past the Arizona Cardinals 49-15 in the NFC title game Sunday night. It was the type of dynamic performance he put in all season, the sort of promise he showed while winning a Heisman Trophy in college at Auburn. “I keep saying it: We’re not finished. We’re not finished,” Newton said.

MILLER TIME – Broncos linebacker Von Miller was terrific Sunday, getting 2 1/2 sacks and an interception in a 20-18 victory over Tom Brady and the New England Patriots in the AFC title game. “I wanted to do it for Peyton,” said Miller, who was injured and missed Denver’s loss to Seattle in the 2014 Super Bowl.

DOMINANT DEFENSES – Both of these teams excel at defense. The Broncos led the NFL with 52 sacks and allowed a league-low 283.1 yards per game, then made life difficult as can be for Brady on Sunday, knocking him to the ground over and over. No one forced more turnovers than the Panthers, and only five clubs gave up fewer points (the Broncos were one, naturally). Against Arizona, Carolina produced seven takeaways.

CAROLINA’S STARTS – If the Panthers are able to get off to the sort of start they’ve made commonplace lately, they might not even give the Broncos a chance to make a game of it. In their two games this postseason, Carolina outscored its opponents 55-7 in the first half. That includes leads of 17-0 after one quarter and 24-7 after two against Arizona. “We wanted to start fast,” Newton said. “We wanted to keep the pressure on.”

INJURIES –  Panthers linebacker Thomas Davis said he broke his right forearm against Arizona — “I knew something was wrong,” he said — but sounded like someone who plans to play in the Super Bowl. The Broncos, meanwhile, lost both of their starting safeties — T.J. Ward and Darian Stewart — to injuries during Sunday’s game.