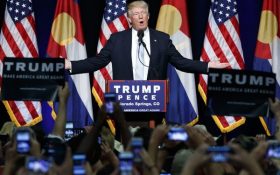 The Democratic National Committee is having serious money problems — so they filed a lawsuit on Friday against Trump campaign officials, the Russian government, and WikiLeaks claiming they all took part in tilting the 2016 presidential election in President Donald Trump’s favor.

The desperate, multi-million dollar lawsuit was filed in a Manhattan federal court and claimed “In the Trump campaign, Russia found a willing and active partner in this effort” to mount “a brazen attack on American Democracy.”

According to the lawsuit, the Trump campaign “gleefully welcomed Russia’s help.”

“During the 2016 presidential campaign, Russia launched an all-out assault on our democracy, and it found a willing and active partner in Donald Trump’s campaign,” said DNC Chairman Tom Perez in a statement.

You can read the DNC court filing here.

Both Manafort and Gates have already been charged in Special Counsel Robert Mueller’s investigation into Russian interference into the 2016 presidential election.

The suit also claims that WikiLeaks founder Julian Assange “shared the defendants’ common goal of damaging the Democratic Party in advance of the election.”

“In 2016, individuals tied to the Kremlin notified the Trump campaign that Russia intended to interfere with our democracy. Through multiple meetings, emails, and other communications, these Russian agents made clear that their government supported Trump and was prepared to use stolen emails and other information to damage his opponent and the Democratic Party,” the suit suggests.

“If the occupant of the Oval Office won’t protect our democracy, Democrats will. It is our obligation to the American people,” Perez said.

Perez even went on to state that the alleged conspiracy is “an act of unprecedented treachery.”

Suing a foreign country can be very difficult due to other nations having immunity in U.S. lawsuit, but the DNC is doing it anyway.

“The DNC said that while it would be impossible to fully repair the harm caused by the defendants, the DNC has filed this civil complaint … to hold the defendants accountable for their misconduct and to ensure transparency.”