Broke California skipping out on lottery payment? - The Horn News 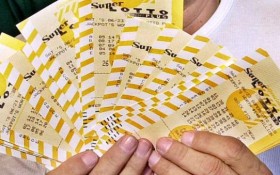 With hours to go and $63 million on the line, the mystery remains: Where’s the winning California Lottery ticket?

According to one man, it was destroyed by the lottery commission so they wouldn’t have to pay.

Brandy Milliner has filed a lawsuit against the state of California and is asking a judge to declare him the winner of the $63 million prize — the largest unclaimed jackpot in state history — after he says the the California State Lottery Commission reneged on paying him.

According to the lawsuit, Milliner submitted the winning ticket to the commission. He allegedly received a letter from the lottery congratulating him on the win, and saying he would receive payment in six to eight weeks.

But according to Milliner’s lawsuit, he received a follow-up letter in January stating his ticket was “too damaged” to be processed, and he wouldn’t receive payment.

But the state, which is nearly $800 billion in debt, allegedly refused to return the ticket.

Lottery spokesman Russ Lopez said Wednesday that the lottery was reviewing the claim.

The commission has said that, should the 5 p.m. Thursday deadline passes and nobody produces the ticket at a lottery office, there will be no prize awarded. “Unfortunately, the rules are the rules,” lottery spokesman Alex Traverso said.

The winner can accept the $63 million in payments spread out over 30 years or accept a much smaller lump sum of $39.9 million (before federal taxes).

Meanwhile, the legal squabbling has begun. A lottery spokesman says those claiming to be jackpot winners routinely face an investigation to determine the credibility of the claim.