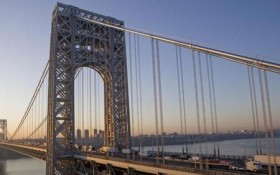 At least one of the people involved but not criminally charged for their role in the politically motivated 2013 lane closures of the George Washington Bridge in New Jersey wants to keep a list of unindicted co-conspirators from becoming public.

Someone included on the list that a judge has ordered federal prosecutors to make public by noon Friday filed a court motion late Thursday asking to intervene anonymously to block its release, arguing it would unfairly brand them a criminal.

The motion says the man will be “publicly branded a felon without due process of law, causing him immediate and irreparable reputational harm.”

Bruce Rosen, an attorney for the media companies including The Associated Press that successfully fought for release of the document, said they will oppose the motion. He said the person is looking to deal with the same issues already dismissed by Judge Susan Wigenton. It wasn’t immediately clear if Wigenton would rule on the motion before the documents were released.

The U.S. attorney’s office, which brought the indictment against two former aides to Gov. Chris Christie, had opposed the release of the names over individual privacy concerns. But Wigenton said it was in the public’s interest to release the list limited to those “whom the Government has sufficient evidence to designate as having joined the conspiracy.”

Bridget Kelly, Christie’s then-deputy chief of staff, and Bill Baroni, a top Christie appointee to the Port Authority of New York and New Jersey, the agency that operates the bridge, face federal wire fraud and civil rights charges and are scheduled for trial this fall.

They are alleged to have engineered the lane closures to create traffic jams in nearby Fort Lee, whose mayor had declined to endorse Christie for re-election. Both have pleaded not guilty and have sought to have the charges dismissed.

Christie has not been charged and has denied knowledge of the closures.

Thursday night’s motion came on the same day the organizations asked federal prosecutors to release a separate list which reportedly shows the names of people who may have known about the conspiracy but weren’t criminally charged.

Rosen said he has requested a copy of the second list, which was created by federal investigators. He said the organizations will seek a court order to release the document if prosecutors don’t provide it.

Kelly’s attorney, Michael Critchley, initially requested the names in a filing in early March, a few weeks after a footnote in a government filing referred to individuals “who may have had knowledge of the conspiracy or took actions that happened to further its goals” but did not join the conspiracy.

A spokesman for the U.S. attorney’s office declined to comment Thursday on the media request.