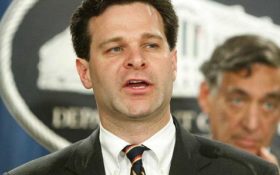 Here are five key things to know about Wray — and why the media is NOT happy with the move.

Wray began his career as an assistant U.S. Attorney for the Northern District of Georgia in 1997 and quickly worked his way up. In Trump’s announcement tweet, the president described Wray as “a man of impeccable credentials.”

He’s not alone. In 2003, when former President George W. Bush nominated Wray to the position of assistant attorney general in charge of the Justice Department’s Criminal Division, he was approved unanimously by Congress.

While there, Wray oversaw several high-profile investigations, from the Enron scandal to the Justice Department’s response to radical Islamic terrorism post-9/11.

There were no objections from Democrats and liberals then.

2) Wray once threatened to resign in a face-off over domestic spying with George W. Bush’s White House

According to CNN, “Wray was among the top Justice Department officials who planned to resign en masse with Comey and then-FBI Director Robert Mueller after top White House officials attempted in 2004 to reinstate a warrantless domestic surveillance program that the Justice Department had ruled illegal.”

During the face-off against the Bush administration, there were no objections from Democrats and liberals on Wray’s integrity.

Over the past year, liberal news organizations have made millions of dollars attacking everything Trump has done.

But there’s a 20-year history of Wray’s bipartisanship that was consistently praised by Democrats and liberals — and that has caught the mainstream media off-guard.

How does a news organization attack Trump over the Wray nomination, when they’ve seemingly never once said a negative thing about Wray?

The media has been working hard for hours to figure it out — and everyone knows that liberals hate hard work.

4) Wray is an expert in white-collar crimes

Since leaving the Justice Department in 2005, Wray has been working for the prestigious lawfirm King and Spalding.

Bible Mystery: can anyone explain these 3 strange words? (sponsored)

Experts consider Wray one of the nation’s top litigators in white-collar crimes — which is bad news for Wall Street bankers.

Investigators have been probing lane closures at the George Washington Bridge during Christie’s tenure — and Christie, a Trump loyalist, had high praise for the work he did.

Last week, Christie spoke to The Bergen Record and mentioned that Trump “would not be making a mistake” to hire Wray as the new FBI director.