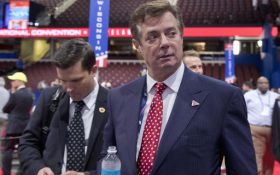 Trump has announced chairman Paul Manafort is resigning from the campaign.

In a statement, Trump says Manafort offered his resignation Friday morning. Trump praised Manafort’s work on the campaign and called him a “true professional.”

Manafort is stepping down in the wake of a campaign shake-up, as well as revelations about his work for a pro-Russian political party in Ukraine. He is being replaced by Kelly Conway.

It was first reported Thursday that Manafort’s firm orchestrated a covert Washington lobbying operation on behalf of Ukraine’s then-ruling political party. Paul Manafort and his deputy, Rick Gates, never disclosed their work as foreign agents as required under federal law.

Trump is due to arrive Baton Rouge, Louisiana today for a tour of the flood-damaged city.

The officials are the highest-ranking Republicans in the state.

Trump is expected to get a look at some of the neighborhoods devastated by flooding.

5 things you need to know about Trump’s new campaign manager, Kelly Conway, and why she’s the perfect woman for the job.