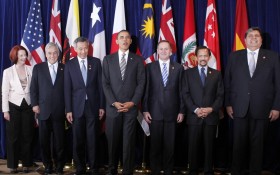 The agreement on the TPP was reached Monday after marathon negotiating sessions in Atlanta through the weekend.

“We think it helps define the rules of the road for the Asia-Pacific region,” said U.S. Trade Representative Michael Froman.

Japanese Prime Minister Shinzo Abe welcomed the basic agreement as “a farsighted policy for all participating countries that share the values and try to build a free and fair economic zone.”

The deal still has to be approved by the U.S. Congress, where opposition is widespread. President Obama has to wait 90 days after agreement before signing the pact, and only then will Congress begin to debate it.

As a result, a vote on the agreement likely will not happen until well into 2016. Given the political sensitivity of the deal, supporters of the agreement may push to hold the vote as far ahead of next year’s elections as possible. Congress can only give the deal an up-or-down vote; it can’t amend the agreement.

Many of the tariff reductions and other changes will be phased in over several years, so benefits to the U.S. economy could take time to materialize.

Peter Petri, a professor of international finance at Brandeis University, says he doesn’t expect the deal to lead to any U.S. job gains. But he forecasts it will boost U.S. incomes by $77 billion a year, or 0.4 percent, by 2025, mostly by creating export-oriented jobs that will pay more, even as other jobs are lost.

The Obama administration has also pursued the deal as part of a strategy to lift U.S. influence in fast-growing Asia and to counter China’s growing influence. China, the world’s second-largest economy, is not part of the agreement, but potentially could join later.