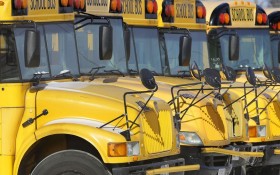 The Los Angeles Unified School District (LAUSD), the second largest school system in the country, shut down completely Tuesday after an error-filed terror threat was emailed to board members.

Bratton said the person who wrote the note claimed to be a jihadist, but made errors that made it clear the person was a prankster.

A law enforcement official says the threat was emailed to a school board member late Monday and appeared to come from overseas. The official spoke on condition of anonymity because he was not authorized to speak publicly about the investigation.

Officials would not elaborate on the threat, saying it was still being evaluated, but said the shutdown came as a precaution. Schools would remain closed until the threat was cleared, which could happen by the end of the day, officials said.

Los Angeles schools commonly get threats, but Cortines called this one rare.

“It was not to one school, two schools or three schools,” he said at a news conference. “It was many schools, not specifically identified. But there were many schools. That’s the reason I took the action that I did … It was to students at schools.”

Cortines said he wants every campus to be searched and a report given to him and the school board that they are safe. The district has more than 900 schools and 187 public charter schools.

The superintendent said the district police chief informed him about the threat shortly after 5 a.m.

“He shared with me that some of the details talked about backpacks, talked about other packages,” Cortines said.

No students would be released on their own, and school leaders would wait with children whose parents had not yet arrived to pick them up, he said.

The closure came the same day classes were canceled at San Bernardino Valley College because of a bomb threat. Students and staff were sent home around 5:30 p.m. Monday after the threat was made.

Parents/Guardians please bring proper ID when picking up your child at school. They will be required.