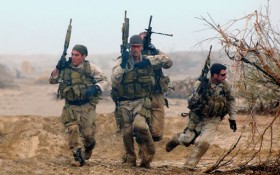 Score one for the good guys!

It’s the first successful capture of an Islamic State fighter by American commandos that have been recently deployed in the region.

According to the New York Times, defense officials described the prisoner as a “significant Islamic State operative” and said “the capture as a crucial development in battling the Islamic State,” but declined to specifically identify him.

Intelligence experts believe doing so could compromise any intelligence gained during the interrogation of the prisoner, who is expected to be turned over to Iraqi authorities after U.S. officials finish.

The U.S. has deployed about 200 new special operations forces to Iraq, comprised of mostly Delta Force. The commandos are working with the Iraqis to go after ISIS fighters and commanders, “killing or capturing them wherever we find them, along with other key targets,” Defense Secretary Ash Carter said.

Brett McGurk, special presidential envoy for the global coalition to counter ISIS, told Congress this month that in the final six months of 2015, 90 senior to midlevel leaders were killed, including the ISIS leader’s key deputies: Haji Mutazz, the top leader in Iraq, and Abu Sayyaf, the ISIS oil minister and financier.

In May, a Delta Force raid in Syria killed ISIS financier Sayyaf, yielding intelligence about the group’s structure and finances. His wife, known as Umm Sayyaf, was captured

Umm Sayyaf, a 25-year-old Iraqi, is being held in Iraq and facing prosecution by authorities there. She also was charged Feb. 9 in U.S. federal court with holding American Kayla Mueller and contributing to her death in February 2015.