Where’s Pope Francis headed next? Check out our online tracker - The Horn News 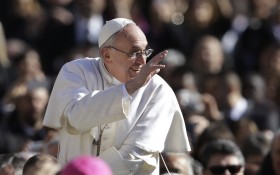 Pope Francis arrived in the United States Tuesday after wrapping up his four-day trip to Cuba.

The Pope’s arrival marks the beginning of what the Associated Press called “the pomp and pageantry that Washington will put on display” to welcome the leader of the world’s 1.2 billion Roman Catholics.

Today, Francis wraps up his stay in DC, then plans to visit New York, before heading to Philadelphia and then returning to the Vatican.

Stay tuned to the Horn for more on this historic trip.