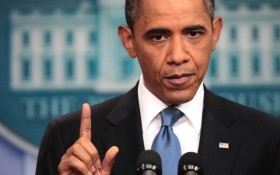 When President Barack Obama was elected, he promised to make his administration the most transparent in U.S. history.

He not only broke that promise — he may as well have set it on fire. And now his administration is going to have to answer for its secrecy in court.

The White House and several federal agencies have just been slapped with a major lawsuit by the Cause of Action Institute, a government watchdog group.

CAI is the latest to accuse Obama, his top aides, and federal agencies of repeatedly breaking the law and refusing to release public documents, especially when they pertain to sensitive issues or administration scandals, like the Hillary Clinton email controversy.

The Obama administration has long been criticized by the press as one of the most obstructionist in all of U.S. history. According to analysis by The Associated Press, Obama’s administration set a record for censoring government files or outright denying access to them last year.

In the last year, Obama’s administration took longer to turn over files when it provided any, said more regularly that it couldn’t find documents, and refused a record number of times to turn over files quickly that might be especially newsworthy.

The administration also acknowledged in nearly 1 in 3 cases that its initial decisions to withhold or censor records were improper under the law.

According to CAI, the Obama administration even created a secret process where government agencies have to route many FOIA requests through the White House Counsel’s office before responding.

The White House’s backlog of unanswered FOIA requests at year’s end grew remarkably by 55 percent to more than 200,000. It also cut by 375, or about 9 percent, the number of full-time employees across government paid to look for records. That was the fewest number of employees working on the issue in five years.

Now, the CAI lawsuit will ask a federal judge to demand that the Obama administration stop its stalling tactics and start complying with FOIA requests.

“The Obama administration … has interfered in the FOIA process in ways that violate the statute and hinder its purpose of federal transparency,” CAI said in its release. “Although President Obama came into office with promises of transparency, his administration’s actions have not matched such rhetoric.”

Under the president’s instructions, the U.S. should not withhold or censor government files merely because they might be embarrassing, but federal employees last year regularly misapplied the law.

According to The Associated Press, in emails obtained from the National Archives and Records Administration about who pays for Michelle Obama’s expensive dresses, the agency blacked-out a sentence under part of the law intended to shield personal, private information, such as Social Security numbers, phone numbers or home addresses. But it failed to censor the same passage on a subsequent page.

The sentence: “We live in constant fear of upsetting the WH (White House).”