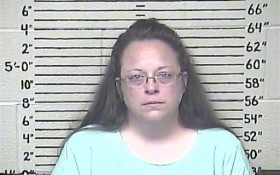 After five days behind bars, controversial Rowan County, Kentucky clerk Kim Davis has been ordered released from jail Tuesday by the same judge who originally locked her up.

U.S. District Judge David Bunning lifted the contempt order, but directed Davis not to interfere with the granting of marriage licenses by her deputies. She was originally arrested for refusing a court order to issue marriage licenses to gay couples.

The move came down just before Davis was to receive jailhouse visits from presidential candidates Mike Huckabee and Ted Cruz.

Davis was thrown in jail on Thursday, becoming a hero among religious conservatives for the boldest act of resistance by a public official yet to the U.S. Supreme Court ruling earlier this year that legalized gay marriage across the nation.

Outside the jail where Davis was held, word spread slowly through a crowd of supporters in the afternoon, and some said they couldn’t believe the news.

Davis, an apostolic Christian, says that gay marriage is a sin and that it would be against her conscience to issue a marriage license to a same-sex couple.

Here’s the latest on what’s going on (all times local):

A second county clerk in Kentucky who has refused to issue marriage licenses because of religious beliefs says he’s relieved that Kim Davis has been ordered released from jail.

Casey County clerk Casey Davis says he thinks a judge did the right thing Tuesday by ordering her release.

Davis, who is not related to Rowan County clerk, says: “It’s been a total injustice.”

Casey Davis is still not issuing marriage licenses. He says the conflict could come to his county next. He says only one same-sex couple has inquired about a license. They called the office and were told no licenses were being issued, and Davis says that’s the last he heard from them.

He says that gay marriage is a sin and that he’s willing to go to jail, as Kim Davis did. But he like many other clerks, Casey Davis hopes for a legislative solution; however, the state legislature isn’t scheduled to meet until January. The governor has refused to call a costly special session.

The Kentucky county clerk who has refused to issue marriage licenses because of her religious beliefs will be released from jail, where she’s been held since Thursday on a contempt of court charge.

Bunning’s ruling says he’s satisfied that Davis’ office is complying with orders to grant marriage licenses. He ordered Davis not to interfere with that business. Deputy clerks have been issuing the licenses. Five of the six deputies told Bunning they would do so, although some were reluctant and cited religious beliefs. Bunning’s ruling requests updates on the five deputy clerks’ compliance from their lawyers every 14 days.

Bunning sent Davis to jail on Thursday. Before the release order, GOP presidential candidates Mike Huckabee and Ted Cruz each had planned jailhouse visits with her Tuesday afternoon.

Outside the jail, word spread the crowd. Some said they couldn’t believe it. Supporters chanted “Let Kim go!” Police officers and others gathered at the front door. Davis’ husband, Joe Davis, went inside. Huckabee followed shortly after.

A Republican congressman from Kentucky says a federal judge’s decision to jail a Kentucky clerk was premature because the state legislature hasn’t had time to update its marriage laws since the U.S. Supreme Court effectively legalized gay marriage.

Republican U.S. Rep Thomas Massie said Tuesday outside the jail where Rowan County clerk Kim Davis is being held that state law is in flux.

He pointed out that Kentucky’s law still requires the woman in a relationship to apply for a marriage license. It makes no mention of same-sex relationships. He says the legislature needs to update that and several other laws, including ones that require marriage licenses to be issued under the county clerk’s authority.

Dozens of people are crowding the lawn outside the detention center where two GOP presidential candidates will meet with a Kentucky clerk jailed for refusing to issue marriage licenses to same-sex couples.

Candidate Mike Huckabee will host a rally Tuesday in front of the jail after he meets with Rowan County clerk Kim Davis. He says Davis is simply exercising her religious freedom. Their visit is scheduled for about 2 p.m. Fellow candidate Ted Cruz says he’ll meet with Davis about 1 p.m., after he holds a news conference.

Fifty-seven-year-old Tom Baker drove more than two hours from his home for the rally. He says: “She hasn’t committed any crime. I don’t see how anybody can force anybody to go against their religion.”

Local officials scrambled to manage the crowd. A fire truck blocked access to the jail. Businesses along Main Street put up yellow caution tape. Some wanted to prevent visitors from clogging their lots. Others charged as much as $20 for parking. At red lights, men handed out literature urging people to write letters to Davis and to the judge who put her in jail.

Three of the four couples whose lawsuit led to the jailing of a Kentucky clerk on a contempt charge have received marriage licenses.

Attorneys for the couples filed a report Tuesday. It notes that two same-sex couples and one straight couple have received licenses since Rowan County clerk Kim Davis was ordered to jail.

Bunning also asked the couples’ attorneys to submit a report detailing the status of their attempt to receive licenses. Five of Davis’ six deputy clerks agreed to issue the licenses. In the document filed Tuesday, attorneys attached the licenses the three couples received. The forms were altered to exclude Kim Davis’ name and were initialed by a deputy clerk.

It’s unclear whether the report will factor into the judge’s decision over Davis’ continued imprisonment.