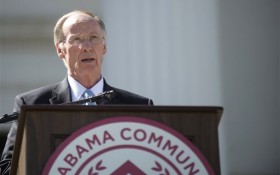 A Republican Alabama lawmaker has filed an impeachment resolution against GOP Gov. Robert Bentley in the wake of a scandal involving one of the governor’s top aides, who has since resigned.

The resolution by Rep. Ed Henry of Hartselle will likely be sent to the House Rules Committee for consideration, and it’s not clear if it will have enough support to move forward.

Some lawmakers have said impeachment discussions are premature until investigations into Bentley’s conduct have been completed.

Henry said Tuesday that Bentley has betrayed the trust of the people of Alabama. Henry and Bentley have clashed in the past over Bentley’s push to raise taxes in the face of a budget shortfall.

“It will be a difficult process,” Henry said. “The process starts today.”

He added later: “If he truly loves the people of this state, he’ll step down.”

The Alabama Constitution lays out a loose procedure for impeachment for offenses including moral turpitude, willful neglect of duty and corruption, among other things.

Bentley last month admitted making inappropriate remarks to his former senior political adviser, Rebekah Caldwell Mason, 44, but denied accusations of an affair. The admission came after Bentley’s former law enforcement secretary, Spencer Collier, accused the governor of having an inappropriate relationship with Mason. Collier said he heard a recording of an overtly sexual conversation between the governor and a woman he presumed was Mason.

Dianne Bentley, the governor’s ex-wife, filed for divorce in 2015 saying their 50-year marriage had suffered an irreparable breakdown.

Recordings obtained by The Associated Press purportedly show the governor — before his divorce — professing love to someone named Rebecca or Rebekah and telling her how much he enjoyed kissing and touching her breasts.

“I love you so much; I worry about loving you so much,” Bentley says on the call.

The governor in a press conference last month said that he did not have a “physical affair” with Mason and that there was no “sexual activity.”

The scandal has engulfed Bentley, a mild-mannered dermatologist and former Baptist deacon whose political ascendency was based partly on his morally upright, honest reputation.

Mason played a key role in Bentley’s administration but was not on state payroll. She was paid with the governor’s leftover campaign funds and also did work for a nonprofit organization formed to promote Bentley’s agenda.