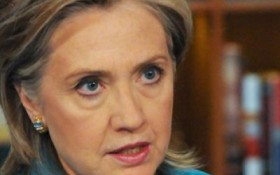 The key former State Department aide who helped set up and maintain former Secretary of State Hillary Clinton’s controversial email server has struck a deal with federal authorities in exchange for his cooperation in the investigation, and some are speculating this could be one of the last dominoes to fall in the lead-up to a Clinton indictment.

Multiple sources have announced Bryan Pagliano has accepted an immunity offer by the Justice Department and FBI after months of refusing to answer questions, and will now begin fully cooperating with investigators.

Sources say the criminal probe into Clinton’s potentially illegal email server has launched into a new stage recently, as the FBI has concluded it’s review of the emails and is now reviewing whether the set-up was officially a crime.

Pagliano had previously refused to testify to a House committee regarding the deadly 2012 Benghazi attacks, and his lawyers said he wouldn’t testify before any congressional committees but would instead continue asserting his constitutional right not to incriminate himself.

Pagliano’s lawyers also previously announced that he would refuse to testify if served with a subpoena by two Senate committees looking into the email controversy.

Senate Judiciary Committee Chairman Chuck Grassley and Homeland Security and Government Affairs Committee Chairman Ron Johnson — both Republicans — have previously said they had considered offering Pagliano immunity from any potential prosecution in an effort to compel him to testify in their own investigations.

Federal investigators have been looking into the security of Clinton’s email setup amid concerns from the inspector general for the intelligence community that the classified information that passed through the system may have been done illegally.